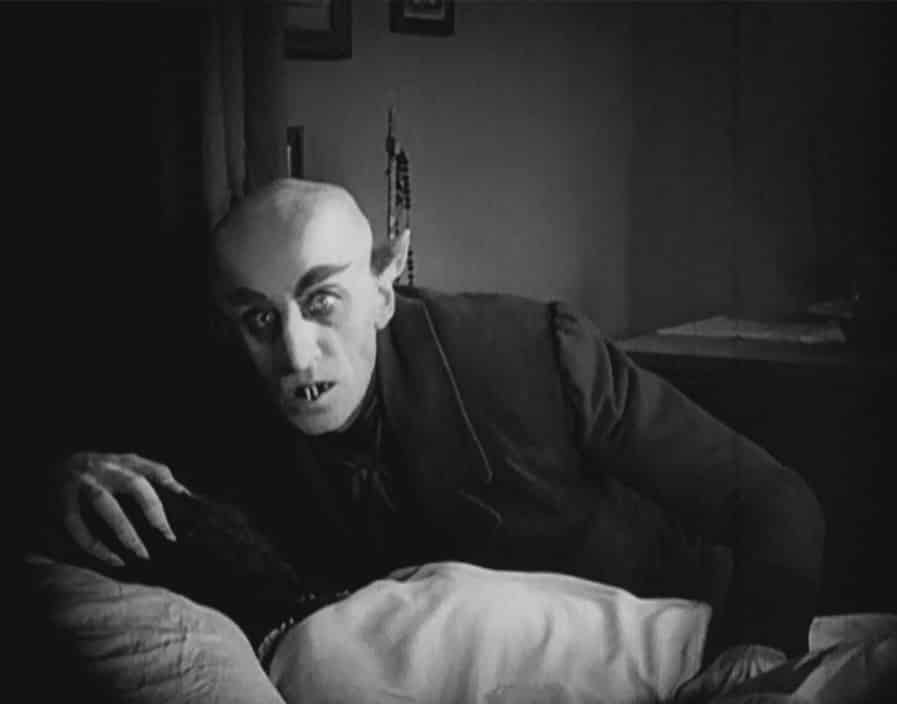 An absolute classic, and deservedly so! The oldest still surviving film adaptation of Bram Stoker's Dracula remains one of the most visually stunning and absolutely gothic films ever made. A lot of people these days would probably not be very interested in watching an old silent film, but the original Nosferatu has undeniable craft and beauty. In a lot of ways, I actually preferred its economy of storytelling to a lot of the other films that I saw as part of the Vampire Weekend, forced to communicate so much story, atmosphere, and character solely through visuals. The dialogue in some of these other vampire movies can get pretty overwrought! I especially felt that it compared very favorably with Werner Herzog's Nosferatu the Vampyre in this regard. For instance, the scene in the Transylvanian inn communicates so much solely through physical movement and set in the silent film, while in Herzog's rendition the scene drags on.

Admittedly, however, there are aspects of the film which can appear goofy to a modern audience. Scenes of Count Orlok, the titular Nosferatu, seen at "night" while clearly casting a shadow as though in bright daylight specifically caused a lot of unintentional mockery on the part of my audience of friends I was watching the film with. On top of this, there are fantastic elements of the original Dracula story which go criminally underutilized, such as the iconic character of van Helsing, or his German equivalent in the case of this film. Neither of these make the film bad by any means, but they don't necessarily compare favorably with some of the closer adaptations.

Oh wait, I haven't even talked about the most distinctive part of this film, and the main thing that undoubtedly makes it so famous! Count Orlok himself (which, as an aside, that is just such a great name), is one of the best and most unique vampire designs I have ever seen. Max Schreck's outstanding performance as the count brings such a delightful physicality to a performance that easily could have been rote. I just love every single time he slinks around a dark hallway or curls his fingers in a grotesque claw. Schreck's grotesque monstrous makeup completes the picture; whoever actually came up with the delightfully disgusting, scuzzy, sickly, gaunt, ratlike design for Count Orlok deserves all the recognition in the world!

Additionally, the film just has oustanding aesthetics and vibe. It is dark, starkly lit in monochromatic hues, gothic in its sensibilities, and pervaded by a sense of a mix of melancholia and fervent disgust. It is often included with the beautifully artistic German expressionist movement, and while Schreck's performance as Orlok definitely fits into that milieu the sets are very naturalistic, leaning more on historic architecture than looming abstraction. I adore the cinematography, the acting, the makeup! The underlying fear of plague is also fantastic and fitting, hearkening back to older conceptions of the vampire than the aristocratic Drac that has become more well known.

I can go on and on about how spooky and fun this movie is, how beautiful it is, how much I love Count Orlok's design, etc., but I've already spent too much digital ink on my kinda rambling thoughts. It also isn't a perfect movie by any means. The character of "Ellen" is woefully underutilized and downplayed, something which I surprisingly preferred in Herzog's version. Also, something that I will recommend to anyone watching this film or any silent film: watch it with friends and narrate the dialogue/title cards together! Me and my friends did that here, and it was such a good idea.

Before you go, here's a gallery of original promotional materials and posters for Nosferatu! I think they are absolutely beautiful and unique, and I just wanted to share 'em!