Back in February, I hosted an informal film festival for my friends featuring four days of vampire film double features! That feels like ages ago at this point, can't believe it's been so long! I called the film fest VAMPIRE WEEKEND (Of No Relation to the Band of the Same Name), both because it was very literally a vampire themed weekend, but also because I thought it would be funny. So I selected a themed pair of movies a night, acquired food (including, very prominently, the promotional Batman bat shaped "Crazy Calzony" from Little Caesar's because I felt it was thematic and also I really like Little Caesar's pizza), and we just spent the weekend on Draculas and Nosferatus! Since I like writing movie reviews and it seemed to me like a fun thing to add to my site, I'll be reviewing what we watched! The selection was:

On top of all this, to truly complete the film festival experience, we held a vote on the best film! Only, rather than just voting at the end for the best movie of all eight, it was structured as a bracket, to determine which film is...
THE MOST VALUABLE VAMPIRE (MVV)!

The Horror of
Dracula

Interview with
the Vampire

Interview with
the Vampire

is the
Most Valuable
Vampire!

Click the links above to go to the reviews! 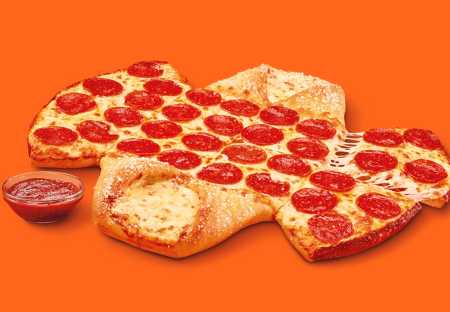 As one of the staple foods of the Vampire Weekend, I felt that I had to add a review of this crazy concoction to my page of vampire movie reviews. It's totally relevant, I mean come on, it's shaped like a bat! Or uh, kinda shaped like a bat I guess? The thing looks even less chiropteran in real life, unfortunately. But what it lacks in actual fidelity to the distinct appearance of a bat, it more than makes up for in flavor! I know Little Caesar's is basically a meme at this point, people saying it tastes like cardboard, that it's trash, etc. Well I'm here to tell you I'm #TeamLittleCaesar's and that their pizza is actually pretty good. It's been a controversial opinion among my friends, but I very much would pick Little Caesar's if I had to pick a pizza chain from which to snatch some 'za. Like, there's definitely better local joints in pretty much any town, but if I'm getting pizza chain pizza I'm gonna go with that Roman stuff. Anyway, the Batman Promotional Tie-in Crazy Calzony is a really unique creation; firstly, for the sake of whatever poor research assistant has to do digital archaeological work on this site in three hundred years, a crazy calzony was (or well, it is to me right now, but I'm speaking to someone in the future here) a dish served at Little Caesar's restaurants that, as the name implies, combines the features of a calzone (just in case this also is gone in three hundred years' time, a calzone is an Italian dish of folded dough with a savory filling) and a pizza (I assume pizzas are eternal). So there's pizza slices, and then on the sides there's knots of folded over calzone with cheese inside. In a normal calzony (as if there can be such a thing), there are four such "calzones", but on the Batman Promotional Tie-in Crazy Calzony there are only two, presumably modeling the head and tail of a bat, while the unfolded wings of pizza flanking the center represent, well, wings! The calzone parts of the thing are absolutely delicious, but admittedly kinda indulgent, super cheesy. In general, I just think the Batman Promotional Tie-in Crazy Calzony was a really good food product! Unfortunately, as implied by its very nature as a tie-in product for a movie, this calzony is no longer available and probably never will be again; it was a limited time item sold to promote that new Batman movie, which is not about vampires but is instead about a superhero, I haven't seen it. I assume the normal calzony tastes pretty much the same though. 23 conspirator's knives out of 23.

Poke the eye to go back to the homepage!